In a nutshell, I really wanted to BF my first little one. My husband and I went to the class offered by the hospital. It wasn't helpful or maybe I just didn't know what to listen for.  Regardless, the little person in there didn't take notes and it went in one ear and out the other. He and I just couldn't get it together to make it work and after months of pain, tears, frustration, and more pain my husband gave him a bottle of formula and saved everyone's sanity. Thank God. Patrick did things with that babe that I was just not able to do. He gave him his first bottle, he gave him his first formula, he increased his feedings to proportions that I would have thought would have made a baby explode but every time they worked. Smart man.

I remember trying to nurse E and sobbing because I was bleeding and raw and tender and rock hard. I could hardly stand to have the water hit me in the shower, to wear a bra, to not wear a bra, to feed him, to not feed him, to pump, to not pump. I would sit there and feed him and cry because I knew I would have to do it again in just a few hours. Eventually, months in, we started E on a reflux med and switched to expensive fancy formula. I began to heal and eventually didn't have to pump anymore. It was so frustrating, I could have fed the whole block but my babe couldn't tolerate it. The freezer was full to capacity, we bought another small freezer and I still had milk to spare. I couldn't donate it because I was on a medication. In the end, Patrick had to perform yet another act of kindness and throw out the milk. I couldn't bring myself to put liquid gold in the trash.

Back to Saturday's class...
The first half of the class was really frustrating to me. I spent a good portion of time keeping my mouth shut. I was the only not-first-time-mom there. It was just a different perspective, a more cynical one unfortunately. The video that the RN teaching the class showed was of all of these new moms wearing white with happy babes in white disposable diapers BF'ing with no problem. There was no pain, no crying, no difficulty, no projectile vomit, no exhausted looking parents with disheveled hair in the middle of the night. The RN/lactation consultant was really good but she kept talking about how this was such a natural thing for babies to know how to do. I disagree, I think that it takes practice and that some babies and moms are better about it than others. I didn't want to scare anyone but...

I stuck it out and you know, I came away with lots of great tips and suggestions that I am hoping I remember to try. These are some of the things that the lactation consultant talked about that hit home with me.

1. Positioning is huge. For me, one of the big problems last time was the Cesarean incision and pain. Really the only hold I could comfortable do was the football carry. One of the more natural positions if possible is to lay reclined and let the baby lay stomach to stomach more upright on your chest. I never even thought, or was told, to try this. 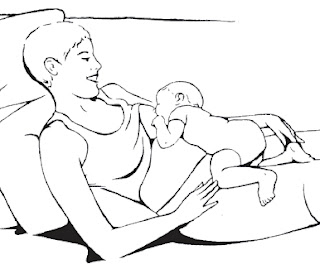 2. Position the baby so that the chin comes in first and you bring the baby to the breast, not the other way around. The baby's chin (bottom jaw) should be moving on breast tissue, not nipple in order to prevent soreness.
3. Hold the baby's shoulders and neck but try to keep hand off the back of the head. This will allow baby to throw their head back and create a vacuum seal with tongue.
4. Feed both sides initially. If you have lots of milk and production is not an issue then it is ok to only feed one side. The beginning of the feed is for hydration (think skim milk) and the end is the milk that is full of fat. If you have more milk than the baby will take in one feeding and you nurse both sides half way, they never get to the good, creamy, filling milk. (This occurred to me last time but I had no idea who to even ask.)
5. If you produce a lot of "extra" it is ok to pump just a tiny bit off the top to relieve the pressure but just like any other supply and demand, if you pump to empty you will make more to accommodate. Sometimes it is best just to let that leak.
6. I need to do a bit more research on this but she said that babies who are born by C-Section often have more gut  irritability. This is due to not having their gut colonized as they go through the birth canal. She recommended a probiotic in order to try and get some of the healthy flora and bacteria into the babies gut. I plan on looking into this a bit more. This has nothing to do with whether or not they have a dairy/soy protein sensitivity. It just helps to create a more healthy environment in there. Shoot, it might be good for mom too. :)
7. The biggest thing that I took from this was "if it hurts, get help". If it hurts, unlatch baby carefully and finger feed or syringe feed so that you can heal. When I lived in Omaha, I felt like there was no body that I could call for help. I talked to two lactation consultants who told me to "stick it out, it will get better". Well, it didn't. This time I have a plan of who to talk to. That in itself is a relief.
8. Another thing that she said was that breastfeeding releases oxytocin in the mother and helps to relax. Mother's who breastfeed have a lower rate of postpartum depression... UNLESS BF'ing doesn't go well. Then it can make things exponentially worse. Yes. I whole-heartedly back this statement.

I have to say, I really want this to go well. I really, really, really do. And to the woman in the video who was teary when talking about how her husband who hated bananas would get up early to make her a peanut butter and banana sandwich; girl, I totally get it, sometimes it's those little sacrifices that mean the world.
Posted by Kate at 8:04 PM

Email ThisBlogThis!Share to TwitterShare to FacebookShare to Pinterest
Labels: Breastfeeding