As our family has stopped buying and eating artificial colors I have been reading more and more on the adverse effects.


Healthy Child Healthy World has had numerous articles on this topic. Also here, and this one I found very interesting as it discusses each of the different dyes.

For instance, did you know that Yellow #5 and Red #40 are azo dyes and they are made from coal tar? "A Consumer’s Dictionary of Food Additives describes coal tar as a 'thick liquid or semisolid tar obtained from bituminous coal, it contains many constituents including benzene, xylenes, naphthalene, pyridine, quinonlineoline, phenol, and cresol'(Winter, 2009, P. 166)." Cancer causing agents.

One item that it is very difficult to avoid food dyes in is children's medicine. They almost all include a red dye of some sort. It's a bit ironic that I can avoid food dyes when he feels good but as soon as he's sick he gets them.

Oh, and don't misunderstand, it's fairly easy to avoid them now as he's so little. I know that as he gets older he'll eat them but maybe the solution is that these dyes should be banned from foods here in the US as they are in other countries. Even in Europe, there are warnings on the labels of foods that contain artificial colorings.

I know that my family thinks I am crazy and maybe that is true. Maybe this isn't the battle to be fighting but in the meantime, I'll be at Trader Joe's. :)
Posted by Kate at 8:54 AM 1 comment:

Baking Soda and Listening to Your Mother

My mom has been touting the benefits of cleaning for baking soda for several years now. I have always nodded and smiled and then reached for the Lysol or Method or whatever other cleaner was under my cupboard. I have no idea why I didn't pay more attention. You would think by 31 years old I would realize how very rarely she is wrong. Sigh. Anywho, I was scrubbing the kitchen (for her birthday party actually) and I went to get out my cleaning supplies and realized I was, for all intensive purposes, out. I have a small child and an even smaller window of opportunity for which to get anything done and so I reached for the baking soda. I was a bit skeptical but miracle of miracles, everything came clean with so much less work. In fact, I was so amazed, that I kept right on cleaning. I did the appliances and the counters and the sink and the faucets. It cleaned the gunk right off the knobs on the stove and it cleaned the stove top with so much less work than usual. Mr KT had made spaghetti the night before (YAY!) as I was working late (BOO!) and it had boiled over, it even took care of that! As I cleaned I just kept shaking my head and thinking, "self, let this be a lesson to you... Always Listen to Your Mother!" 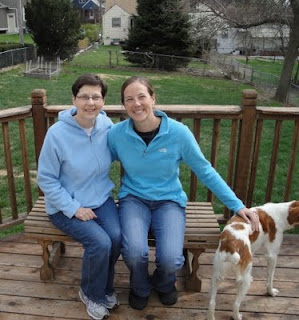 Happy Birthday Mom!
Posted by Kate at 1:04 PM No comments: