I can't wait for the sunshine! All natural mood enhancing, diaper bleaching, plant growing, snow melting, earth warming, ground drying sun. My husband said that in a past life I must have been a flower. That is how much I love to be outside basking in the sun. Oh, and yes mom and Patrick, Emmett and I will be slathered in sunscreen, don't worry. 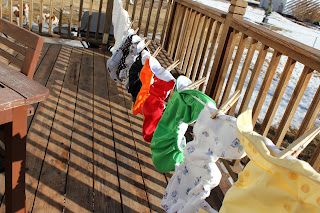 I have to admit that I am getting a little tired of all the talk about "clean eating". This is not really new people! I mean, good for you all for making diet changes but think about why you are changing.  Is it for  the right reasons? Or maybe it doesn't really matter. It seems to me that most people are trying to eat this way to lose weight. Fewer pounds and less inches are good I suppose (except that you all look gorgeous just as you are!) but what about because it is good for your body and the environment and your kids?

This is a "clean eating food pyramid" from The Gracious Pantry. She essentially made it up but I think it makes a lot of sense. More sense than the standard old food pyramid. She has a great website with recipes. Check it out! She also defines "clean eating" for those of you who are curious.

The Basics (from The Gracious Pantry website)
Everyone has to sit down and think about what they want their intake to entail. Do you allow one day or one meal every week or two to treat yourself? Do you eat dairy? Do you bake with regular sugar or switch to honey or agave? Lots and lots of things to consider.

I think I can speak for both of us when I say that we would both prefer a homemade meal from scratch (and doing the dishes) over eating out any day. I have said this before but I prefer to know each and every ingredient that I put in to my body. (Touchy, touchy system).

So, yes! Eat smart, call it "clean" if you like but realize that it goes way past weight loss. That's just a perk.
Posted by Kate at 2:18 PM No comments:

Anyone else think it is strange that in Europe they use natural food dyes or are manufacturing foods with natural colors and we in the US are still eating the food dyes made in the lab? Dyes that have potentially harmful effects.

In 2008, the UK's Food Standards Agency (essentially their FDA) asked food makers to voluntarily recall six artificial colors in food by 2009. Most all of the companies complied. A few months later, the European Parliament voted to add warning labels with the phrase "may have an adverse effect on activity and attention in children" to products with the same six synthetic red and yellow dyes. This encouraged many large food makers like Nestle to reformulate their products rather than risk a decline in sales. These changes came after several research studies were published regarding the potential link between food dyes and hyperactivity in kiddos.

Many food scientists, physicians, and psychologists aren't so sure the research is conclusive and it is likely that more studies need to be done to prove this one way or the other. One interesting thing to consider is that the safety testing done on the current dyes was done 30-50 years ago. Might be time for an update.

There are lots of ways to color foods. For instance, Kellogg's strawberry Nutri-Grain Cereal Bars that are sold in Britain now contain beetroot red, annatto and paprika extract, while those sold in the U.S. are tinted with Red 40, Yellow 6 and Blue 1. Mmmmm.

I have been paying more attention to the ingredient lists of the foods I eat. We buy a lot of "natural" and "organic" foods and for the most part, steer clear of most processed foods. Kids are obviously the ones most targeted with Fruit Loops and Rainbow Gold Fish and Kool-Aid and we don't yet have any requests for these so we have mainly steered clear. The crazy thing is, there is dye in foods that we don't even think of, some yogurts, the "blueberries" in some bagels, some cheeses, juice, the list goes on and on.

I plan on giving E the same foods his dad and I eat but I am realistic that he will probably eat a red M&M or a little blue frosting somewhere down the line. I just hope that the US catches up with Europe and is at least somewhat conscientious of the problems and concerns.

It's good to be aware!

This is a tricky topic. As a Child Passenger Safety Technician (CPST) I have some strong feelings on this. Child safety seats are expensive but absolutely necessary. Due to these factors, many parents and parents-to-be think that hand-me-downs are the way to go. Unfortunately, they couldn't be more wrong in this case. Car seats have an expiration date, just like bike helmets. The material used lasts 6 years and then it is no longer safe. If the seat is in any type of collision including a fender bender, the seat should be replaced. After a collision, there are potentially cracks in the material that can't be seen. This causes weaknesses that, in the event of another collision, could allow injuries to the child. If someone picks up a seat at a garage sale or a consignment shop, there is NO way to know the history of the seat. Scary! The only time a used car seat is considered safe as a "second" is if you bought it new for your own child, the seat was in no accidents, is within its expiration date, and is used for a subsequent child in your immediate family. You must know the history of the seat.

Enough with my soapbox! The whole reason for this post is that there is a way to recycle these seats. Previously, there wasn't much that could be done with them other than to pitch them in the garbage. It seems like such a waste. And I don't even know how long it takes to break down! At car seat check events we would destroy the outdated seats by cutting up all the strapping and then throwing it all away. (Don't worry, people were given new seats!) Now, there is a better way. Here in our area, there is a car repair shop (Offut Collision Repair) that is taking them! Yay!

This is what their flyer says...
"OCR Child Safety Seat Recycling Program

OCR is now accepting child safety seats that have expired, seats that have been in car accidents and seats that are no longer being used. All of this is at no cost to the owner. After being disassembled, the car seat materials are then sent to be destroyed and recycled.

OCR would like to encourage parents to be aware of the expiration date on seats and the history of the seats. Child safety seats that have been used in accidents should be destroyed.

Used child safety seats can be dropped off at OCR Monday – Friday from 7:30am until 5:00pm."

So cool. So check around in your area. See if there is a place to recycle your car seats. And by all means, if you bought it new, if they are within the expiration date and haven't been in an accident use them for your second and third babies! Just keep tabs on those dates!
Posted by Kate at 6:58 PM No comments: