Sometimes I think of the intricacies that we moms (and dads) know about our children. Things that only we can know.

I know (sometimes) just what they will eat and won't eat for lunch. I know the oldest one wants his sandwich without cheese (always). I know that the middle and youngest like bananas but my husband and the oldest won't touch them (ever).

I know their language. I know that  middle one calls butter, "honey" and waffles "bagels". Which means that if he says he wants a bagel with honey, it either means a waffle with butter or a bagel with butter so you have to ask the follow up questions. I know that "pumpkin" means a sweet dessert after a meal. I know that when the littlest says "eh" and reaches for the sky, he wants me to look at the airplane or when he says "fla-er" he wants to touch the flower.

I know that the oldest gets car sick, the middle needs to change his shirt if he drips a single drop at dinner and the baby screams when he is lifted in the air overhead. I can tell you that the oldest hasn't seen more than 6 movies all the way through because they are "too scary" and three of those are now off the list as well. 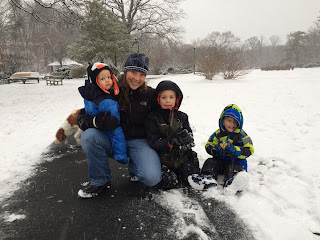 I am sure that my mom could tell you things about us as children. We would tell her "we are going to ride that one way" and she would know which loop we were going to take on our bikes. I am sure she knew which shirts we would wear and which ones would sit in the bottom of the drawers. She knew (and still knows) which foods I loved and which ones would be a battle, and let me tell you, there were many, many food battles. She knew which books we would choose for her to read over and over and many of those favorites are still on her bookshelves.

Moms and dads are the only ones that know so many things about their children.

And then they go off to school. He's nearing the end of Kindergarten and his teachers know so many things about him that I don't. I remember feeling so very strange the first day that I dropped him off at preschool. It was the first time in his life, and in mine, where I didn't know what he had done for every moment. Up until that day, he had spent every moment with either his dad and/or myself, or one of his grandparents. I could ask and know exactly what they had done. For three hours, three times per week he was "on his own" and he grew as a person. I trusted his preschool teacher and he learned and learned and learned.

Then 4 days after we moved to a brand new city, I dropped him off for his first day of Kindergarten. And you know what? He grew some more. Most days I can't get two words out of him about what happened during the day. I ask "the questions" that are supposed to elicit responses. I. Just. Want. To. Know. Something.... Anything.

And so I gave him the space, to grow and change, and be his own guy. It puts a lump in my throat and tears in my eyes to think about it.

And every now and then, when we are walking to school or I am laying with him just before bed he will tell me something. A little tidbit of one of his days. I love those moments and look forward to many more. 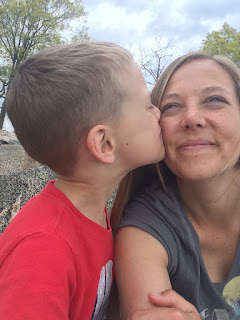