I love to run but it isn't always easy.

Some days the miles fly by with little effort. Other days, it can feel like a slog. It feels like my body is sluggish and my legs are heavy. Maybe my nutrition was off, maybe I did squats and lunges the day before, or maybe I didn't get nearly the sleep I needed. In any event, every step can feel like work.

I prefer to run on the trails. I can't wait for my first mountain race (hopefully in 2019). I have aspirations to do a trail 50K (2019) and a trail 50 miler (2020). There is a speed bump in there this September which will put a halt on my longer training for 6 months but after that I hope to pick it back up. Of course, it is tricky to get that kind of mileage and training in with a family and a husband who works all day, including Sundays and many evening hours, as well as needs to get in his workouts. I do most of my running early in the morning before the boys are up and moving for the day. When I trained for my other 50K races, I was working full time as a physical therapist. In order to get my long runs in, I was up and out the door by 4:00a. This way I could get 3 hours of running in by 7a and could be home and showered, make the boys' breakfast and get them off to school. I did back to back long runs on Tuesdays and Wednesdays before work so that I could have my weekends home with the family and so that Patrick could work on Sundays (and many Saturdays).

Recently, I was running in the woods on the trail and I realized that my perspective on running had changed a bit. I put up a quick Instagram post on this. 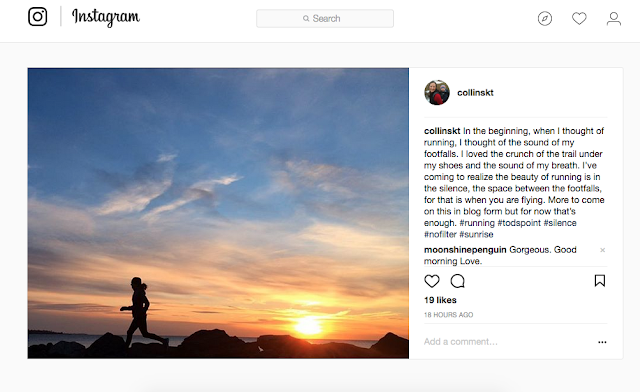 I still love the sound of my feet but I love the idea that the silence is when I am flying. I can't help but smile when I think about this.

Essentially, the definition of walking is to have one foot on the ground at all times.
One dictionary says...
walking (present participle)

Running, however, has a short period during the gait cycle where there is float. This is just after the toe off on one foot and before the heel/foot strike on the other. The therapist in me could go into the biomechanics of gait for you but I'll just stop here with that. Even on the days when running is effort and that period of two feet off the ground feels slim, it still exists. This is what makes it running, rather than walking.

With help from my mom, I did some digging into the words that make up this phenomenon.

Float derives from the word fleet, which is a verb.
To float, to flow, hence glide, swiftly, hence as in Shakespeare’s ‘fleet the time carelessly’


Float has roots from Middle English in flatten or fleton (I've never heard this word before) - to swim or to float
Old High German - flizzan, German - fliessen, to float, to flow
Old Norwegian - flit, flijota to flow float
Sanskrit - plu - to swim or flow

And so, I run, even on the days where it feels less like floating and more like I have lead in my shoes (and my quads). Even on those days, I would still always rather run (and float) than walk.
Posted by Kate at 4:06 PM No comments: