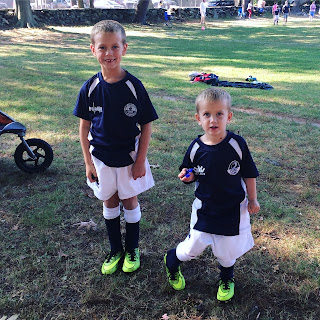 Last Saturday afternoon we loaded up the crew and headed to rugby practice. My oldest wanted to try rugby this year and we agreed. After his first practice, my middle guy decided that he wanted to give it a try too. He mistakenly thought that he was going to get to tackle everyone left and right. The next week we took everyone to practice and M, the 4 year old was hesitant about participating. We encouraged and prompted him and he did play a bit. This went on for a couple of weeks. At the most recent practice, M had a melt down before we got to the fields. He is opinionated, demanding, and a bit defiant. He tends to like a good disagreement and can be impossible to reason with due to his personality and his age. I sent E off to find his coach and when I looked back, my husband was carrying M who was stretched out stiff as a board, in his arms whimpering. I traded the content baby in the stroller for the unhappy preschooler (not a great trade) and carried him towards his team. Still doing ok in the parenting department up until this point, or so I thought.

I sat down in the grass near where his team was warming up. He sat on my lap with his "mad face" and watched. Here began the downward parenting spiral. It started out innocently enough. I asked him to go play with his team, I told him to go over and stand by his coach. I then proceeded to beg, plead, demand, bribe, punish, and nearly cry. He wanted nothing to do with rugby. Now, to be clear, I don't care if he plays rugby. It was expensive but that wasn't the issue. In the Collins' home, if you sign up or agree to something, you see the season through. It was principle at this point.

And then I stopped. I took a breath and then another. My tactics weren't working.


So I asked him, "M, what could I do to help you feel better right now?"

And do you know what he said?

Cue the broken heart. "Of course buddy. Let's go. Are you ready?"

Keep in mind that these are 4 and 5 year olds. It's about 80% herding cats and 20% learning rugby. I ran up and down the sidelines. I cheered, sent M huge smiles and thumbs up after each activities, gave hugs when needed, and helped to interpret the directions given by the coach. I realized that he really doesn't like to feel like he doesn't know what is going on. I had thought that he was upset by being tagged or caught or missing passes originally. Although this is true, it was more that he didn't like to be disoriented or confused about what he was being asked to do.

He got through the practice with very few tears and even managed a couple of smiles. I had promised a lollipop and 15 minutes on the iPad in my desperation which I made good on when we returned home.

I promised him I would stay with him next week and he agreed to practice.

Often it takes a moment to look at the situation from a different angle. Instead of trying to figure out what a kiddo needs, sometimes we can ask them. Kids are smart and although the communication bit can be tricky, it's always worth a try. Sometimes kids know exactly what they need. We just have to slow down long enough to listen to them. 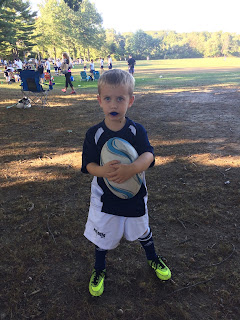